Like I said in my last post, we are spending Cinco De Mayo here at San Jose State!  We've got a show in a couple hours, then we'll be packing up and heading out to Sacramento tonight for a show tomorrow.  Whew!  It is really starting to feel like a tour and less like a vacation... Not in a bad way, per se, but last night was the first night that I actually got on the bus after the show and continued working instead of partying it up!  And yes, I do actually have a job.  Jerks.

Anyway, this morning was a really really fun time - because we got to go to Google Headquarters!!  And it was exactly like you would expect; I got there before everyone else, and I was supposed to meet our contact Anna in the lobby... So I asked a woman walking around the campus where the lobby was, and she said "Oh!  It's right over through there.  Across from the DINOSAUR WITH PINK FLAMINGOS HANGING OFF OF IT."  (the emphasis is mine) Of course, I turn the corner, walk down a pathway... And sure enough, there's a giant T-Rex skeleton with pink flamingos all over it!  Hilarious.

After a few minutes Conan & Andy showed up, and we went into the theater! It was packed: 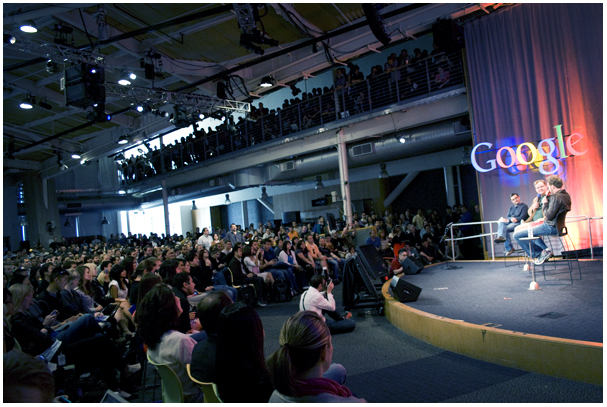 Not content to just entertain folks with jokes, Conan took questions from the crowd... And made one girl's dream come true, by letting her touch his hair: 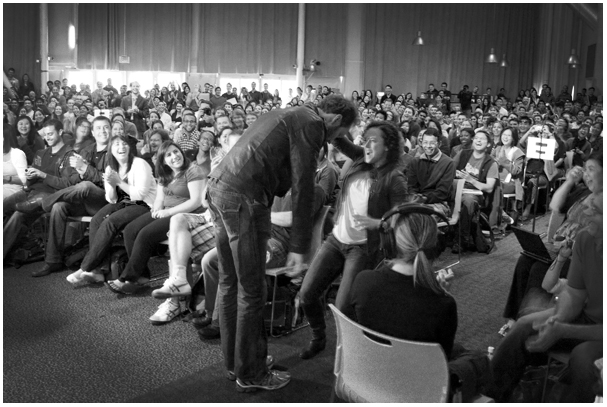 After joking around with all the "Googlers", Conan took a couple of them up on their offer to ride a crazy 6 person bike around outside! Ha ha ha. I'm guessing they didn't let him steer, because everybody made it back alive. ;)

All in all, we had a GREAT time at Google - everyone was really nice, the campus was BEAUTIFUL, and people were all so chilled and laid back that I got a little jealous! It lived up to the hype, I have to say. Google lived up to the hype. I was really hoping to expose some seedy underbelly of googley lies and internet corruption... But I came away with nothing but a smile on my face and a bunch of awesome pictures in my camera! And a severe dose of workplace envy in my heart, of course. ;) A big big THANK YOU to everyone at Google for making us feel so welcome!! You guys are the best!