Sorry for the crazy tweets today - I think my phone is dying, and that was its death rattle.  Sorry kids.  I think the problem has been remedied.  Now I just need to figure out where to hide all the bodies.

Today a small group of us drove up to Harvard for Conan's 25th College Reunion!  As I'm writing this right now, I am sitting in the basement of Sanders Theater, and there is the 25th Reunion Talent Show going on upstairs - there's a lot of acapella groups, some musical comedy group, dance troupes, etc.  Conan's going to do a little monologue and sing some songs to round out the night, so we only brought the band and no one else pretty much.  It's a pretty low key thing; Mike's playing a stand up bass, etc.  Here's a picture of Conan from the mini soundcheck we had today: 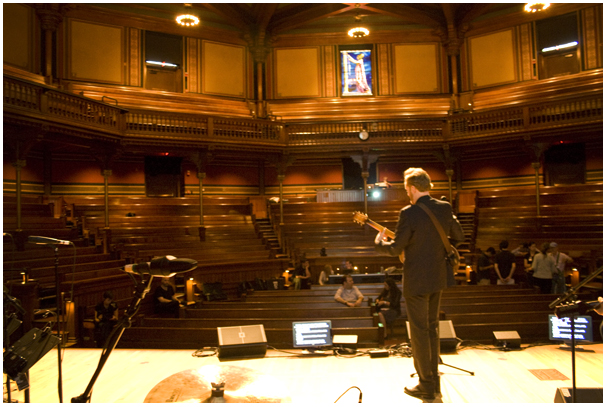 Interesting note: Conan told me today that this stage was the first place that he ever performed comedy!  He was the MC for a women's acapella group called The Radcliffe Pitches.  He bought a yachtman's cap, a 30 dollar tuxedo, stuck a cigar in his mouth, and got up on stage and told some jokes that he had written... And he did okay.  Okay enough that he decided that he wanted to do it again someday, ha ha!  Anyway, it's an important night, so wish us luck!!  See you all tomorrow!