Howdy from Atlanta - our very last stop on the Legally Prohibited from Being On Television Tour!  Atlanta is hot.  Oh so hot. However, it's not as hot as Bonnaroo was - and much, much more importantly - it has electricity, toilets, and very little mud.  It was actually a BEAUTIFUL day today, so Crotteau, Cronick, Me, and Mel all went out on one last day off adventure!  First, we got picked up by Rommel's friend Danielle, who took us down to "The World of Coca-Cola"... Which, to be fair, was just a gigantic building sized advertisement for Coke that you have to actually pay to go into.  Yeah, I know.  But what the hell - we had nothing better to do, so we went in and made the most of it.  Oh!  Also; Crotteau bought one of those new Taylor Swift panoramic cameras earlier today (perfect timing, of course), so check out THIS pic of Cronick and I outside the Coke building:

Pretty cool, right?  This picture is about a million times cooler than the actual "World of Coke", which sucked.  And sucked HARD. I mean, I knew that paying 15 dollars would only gain me entrance into a gigantic advertisement... But seriously.  It was atrocious.  And none of the exhibits were any fun in the slightest. There was one point where they had this touchpad, and they were like "hey, try to draw the Coca-Cola logo with your finger!" I mean, not only is that a stupid idea for an exhibit, but it's just inviting mischief: 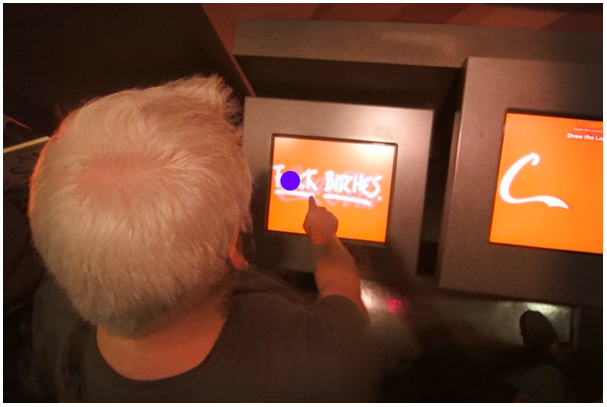 See what I'm saying?  They had it coming. Make Cokeworld more fun, and I won't have to resort to offensive shenanigans.  That's all I ask.

Anyway, after Cokeworld bored us out of our minds, we did something that I've been looking forward to since literally day one of the tour: We visited MURDER KROGER: 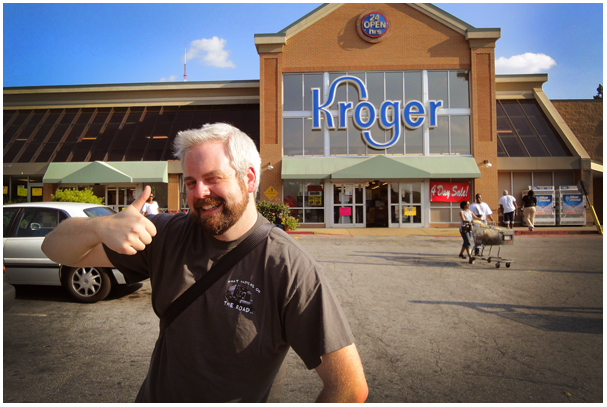 Now, I'm sure you're asking yourself "Hey Bley, what is Murder Kroger?" and also "Hey Bley, why do you want to visit a place called Murder Kroger?" and "Hey Bley, why are you so handsome?" - and to two of those questions I say that my friend Jill told me about this crazy place in Atlanta that I really wanted to visit... And kids, from the condom wrappers in the parking lot to the un refrigerated crab legs int he back.. Murder Kroger did not disappoint.  Holy CRAP.  Here's me in front of the "randomly marked down wine" sale: 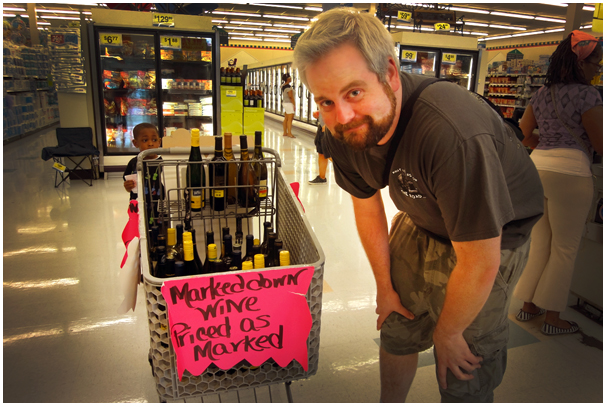 Oh Murder Kroger.  You have my heart.

Luckily, it was daytime - so we made it out of MK alive. So scary.  Once we were back at le hotel, we spruced ourselves up, and went out to the tour wrap party, which was awesome.  It wasn't a big hullaballoo - more of  just a quiet dinner, where we all could talk and laugh and generally enjoy each others company and talk about the crazy time that we've all been having for the last couple months!  So great.  Conan made a speech, and we all ate, drank, and danced the night away.  Very cool and fun.